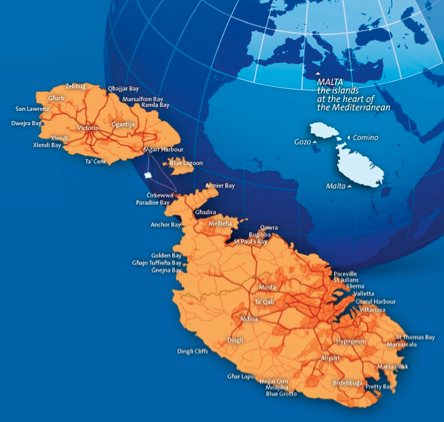 The Maltese Archipelago lies virtually at the centre of the Mediterranean, with Malta 93kms south of Sicily and 288kms north of Africa. A country abounding in culture and history, with a well-educated and friendly people, Malta became a member of the European Union on the 1st of May of 2004 and has rapidly gained a reputation as a serious financial centre.

Malta boasts a warm and sunny Mediterranean climate with typically moderate winters and hot summers. The official languages of Malta are Maltese and English but many people also have a reasonable working knowledge of other European languages foremost amongst which are Italian and French and to a lesser degree German.  Malta adopted the Euro currency on 1st January 2008.

The primary regulator of financial services here in Malta is the Malta Financial Services Authority (MFSA) which is responsible for overseeing, controlling and co-ordinating all international and local financial activity.

The following are just a number of the advantages that companies registered in Malta can offer.

We are listing hereunder internet links that we feel could be of interest to visitors.